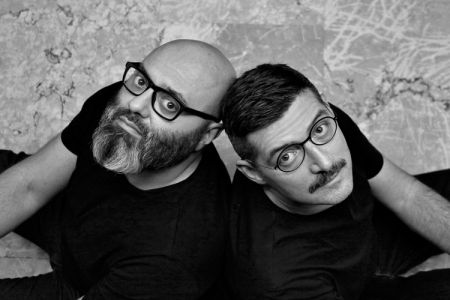 Fabio Calvi was born in 1969 in Pavia, graduated in Architecture in 1996 and opened his own studio in 2004. For almost ten years he represented Flos as art director of installations, points of sale and events.
Paolo Brambilla was born in 1973 in Lecco and graduated in Architecture in '99 at the end of his studies at the Politecnico of Milan and the Polytechnic University of Barcelona. He was awarded an honourable mention in the European 6 architecture competition in 2001. He also began his career as a university lecturer at the School of Design at the Politecnico di Milano from 2001 to 2005. He is currently Director of the PPC Architects'; Association of Milan.
In 2006 began the collaboration between Calvi and Brambilla, who together have designed and engineered for some of the most important companies in the design sector. In 2015 they win the LC50 competition by invitation from the magazine Interni with Cassina and the following year they will be selected in the ADI Design Index to take part in an exhibition design project for Zanotta.

Order by name or price: